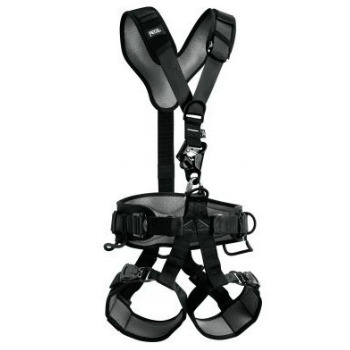 Be the first one to write a review
$479.95 in stock
The Cadillac of Safety Harnesses! If you go high, you'll want the Petzl AVAO.

Petzl, for years known as the best in mountain climbing gear, has produced this full body / sit harness for industrial use. It's lightweight, comfortable and there are no loose straps to catch on the truss or lamps.

Of course this class III harness meets ANSI A10.14-1991 and Z359.1-2007. Not only does it meet these OSHA standards, but Petzl is the ONLY company having a third party (Underwriters Laboratories) test the harnesses to verify that they actually meet these standards including the front sternal "D" ring. It is fully and completely labeled to meet OSHA standards.

Domestic mail is not available for this product. Putting on most harnesses is like is like trying to figure out a Chinese jigsaw puzzle -- not so with the Petzl AVAO. Put it on and take it off like a pair of pants. It couldn't be easier. Once you've got it on, just cinch the two waist straps and then the two leg straps and you're snugged in--waist and leg adjustments are finished. And the straps won't loosen while you're working either. Flip the shoulder strap over your head like a pair of suspenders and clip the INCLUDED steel quick-link into the front tie-in point. That's all there is to putting on the Petzl AVAO.

The padding is new and better than the older highly rated C71. The padded belt is 5" wide and the padded legs are 3 1/2" wide. There are five forged D rings: Two in the front--one for sitting work and the sternal ring for confined space rescue. Two on the sides are for use in positioning like a telephone lineman. The one in the back attaches to a fall arrest system. And there are tool loops on the belt too.

And what happens if you should accidentally fall? The straps are made so that the pressure of the fall is transferred to the leg straps to protect your back and make it more comfortable for you to wait for rescue.

The Petzl AVAO comes in two sizes: The #1: Small to Large and the #2: Large to Extra Large. The AVAO continues to have greater adjustability which makes it fit better than other models. Now, just because you're tall or have a large chest measurement doesn't mean you have to wear a large. Pick your size according to the information below.

You must use a manyard (lanyard) with all safety harnesses.

FAQ: Hey John, what's the deal with the UL rating? We all know that's for electric.
Answer: Right you are, but there's more to the story. Underwriters Laboratories is a private safety testing facility highly regarded for it's electrical testing, but it's not limited to electrical testing alone.

Around 1996 Petzl was just getting into the industrial full body harness business. Prior to that they were a premier European mountain climbing manufacturer. Their harnesses carried the CE label which is a European safety standard more rigorous than ANSI standards. Petzl quickly found out they still needed the ANSI labels on their harnesses in the United States in order to comply with OSHA. They also learned that OSHA doesn't TEST harnesses to certify they meet their requirements -- the manufacturers are left to test their own equipment. So simply put, if the manufacturer says their harness meets OSHA requirements and sews a label into the harness saying that it does -- then it's what we call "OSHA approved."